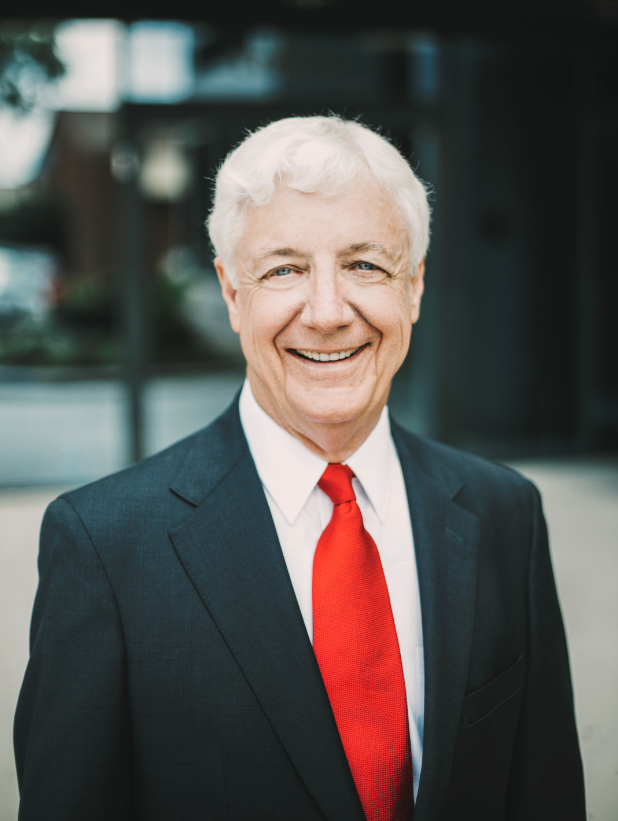 George Allen Moore is a highly skilled, successful attorney. His success has been proven many times over 35 years of law practice. George gets great satisfaction from representing average citizens. He is dedicated and has a passion for ensuring that average people get justice in their business affairs or after they have been injured through no fault of their own. George has compassion, skill, determination and charm.

George Allen Moore has handled numerous high profile cases that have received extensive media attention. He has successfully handled cases involving brain injury, plane crashes, stock fraud, truck wrecks, deadly exposure to negligently manufactured drugs, intoxicated or drug impaired drivers who injure innocent citizens, negligent road construction and maintenance, negligent design or manufacture of machines, explosions and home fires, violation of DOT regulations regarding 18 wheelers, severe burns and scars, negligent installation of hot water heaters, wrongful denial of claims by insurance companies, sale of alcohol to minors by convenience stores, defective residential or commercial construction, heart attacks at work from overexertion, defective airbags, wrecks caused by trucks that exceeded size and weight limits, nursing home abuse, product liability, unrelenting pain from on-the-job injuries, and numerous other cases where the injuries were so severe that the person died or became totally disabled. As a result of many of these cases, employers changed their safety practices to better protect the employees or manufacturers improved their design and construction standards to better protect the average citizen that uses their products. In most of these cases, George Allen Moore has also helped the injured citizens become approved for Social Security disability.

George Allen Moore earned his undergraduate degree in Accounting from the University of Alabama, College of Commerce & Business Administration, in 1970. During his senior year, he received the prestigious S. Paul Garner Accounting Award. George was recognized for superior academic achievement after four years of intense study. After undergraduate school, George entered Law School at the University of Alabama, where he graduated in 1973. During law school, he concentrated on mastering trial skills. Immediately after graduation, he returned to his roots in North Alabama and began helping average citizens.

George Allen Moore is a long-time faculty member of the People’s Law School and is a much sought after speaker on the subject of personal injury and workers’ compensation. His presentations before the People’s Law School are broadcast to approximately one million people in the State of Alabama. He was recently the featured speaker on the subject of Justice In America. This presentation was an outstanding success. The speech was transcribed and has been published in the Alabama Association for Justice Journal. George described how insurance companies and big corporations are seeking to avoid accountability for their wrongdoing and how they are working tirelessly to eliminate the right of Americans to hold wrongdoers accountable.

Three years ago, George Allen Moore and his law firm established the Alabama Justice Center. This organization is dedicated to holding wrongdoers accountable for the injuries they inflict on innocent citizens.

Giving back to the community is an important part of George’s life. In 1988, George Allen Moore was selected as the attorney for the Madison County Board of Education, a school system with almost 2,000 employees and 19,000 students. He has continually served as the attorney for the school system since that time. This has provided George an excellent opportunity to help make a difference in the lives of young people and help shape their future success.

Service to his community has always been one of George’s goals. In 1998, George Allen Moore was appointed to the Board of Directors of Huntsville Utilities and has continually served on the Board since that time. He currently serves as Chairman of the Board and has been elected to this position four times. George Allen Moore was also selected and served for 12 years on the Board of Directors of Huntsville Hospital. He is the only attorney to have ever served on this Board, which governs the largest hospital and health care organization in North Alabama. Huntsville Hospital is over 100 years old and has over 4,000 employees and several hundred physicians of every specialty on its medical staff.

George Allen Moore is a family man. He is married and has two children and three grandchildren. He was born and raised on a small farm north of Huntsville, and is proud to be the son of cotton farmers. While attending the public schools in Madison County, he worked as a bag boy for a grocery store starting in the 10th grade. He learned the value of hard work while driving a tractor and picking cotton by hand. George got to know a lot about people while working side by side in the field with small farmers and share croppers for only a few dollars per day. He witnessed the heartbreak experienced when a family loses a loved one or when a small farmer learns that he has been taken advantage of by a big corporation. Planting, working and harvesting crops helped George develop a passion for ensuring that average people get justice in their business affairs and when they have been injured through no fault of their own. George’s trademark is his ability to identify with his clients’ difficulties. He has dedicated his career to helping the average person who has been injured or taken advantage of by wrongdoers, insurance companies, or corporations.

George Allen Moore and his family are active members of Whitesburg Baptist Church, where George serves on the Board of Trustees. His faith is a big part of his life. George has found that prayer has a healing power that cannot be matched by man and that everything about the law comes from the greatest book on earth, The Holy Bible. There are many, many Bible verses that demonstrate this. Here are just a few such verses:

Micah 6:8 says “What does the Lord require of thee? To do justice, to love mercy, and to walk humbly with your God.”

Isaiah 1:14-17 shows that God commands each of us to “seek justice, correct oppression, defend the fatherless, plea for the widow.”

Psalms 82:3 says to “Defend the poor and fatherless, do justice to the afflicted and needy.”

Exodus 23:6 tells us “Do not deny justice to your poor people in their lawsuits.”

In summary, George Allen Moore is a highly skilled and successful attorney. He has compassion, skill, determination and ingenuity. George has dedicated his career to helping the average person who has been injured or taken advantage of by wrongdoers, insurance companies, or corporations.